Change in Europe and in Greece 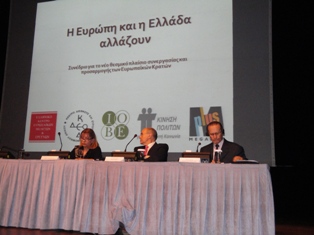 Almost one year after the 31st May 2011 Conference “A year after the crisis: Adjustment in Greece and the Eurozone” organised at the European Parliament, in Brussels, by the GREEK CENTRE OF EUROPEAN STUDIES & RESEARCH (EKEME), TEPSA and ECEFIL, a Conference is planned in Athens, in [20th] February 2012, by EKEME and CITIZENS’ MOVEMENT FOR AN OPEN SOCIETY to discuss “Change in Europe and in Greece”.
This new Conference aims to review the changes brought forward in order to (attempt to) provide a way out of the deepening European debt crisis, but also the institutional re-set of the EU that promises/threatens to be the most radical ever (and within the briefest time-span ever). Greece is not only the Conference hosting country; it has also served as detonator of the major upheaval now diagnosed as “the European debt crisis” and is experiencing the most severe consequences.
The overhaul of the European Treaties that is planned, by means of an “International Agreement on a Reinforced Economic Union”, is supposed to lead to new foundations for the Eurozone which will allow for the functional solidarity needed to keep the euro afloat, along with increased “economic governance” that will serve as the political counterweight needed. Both will largely surpass whatever the Community (and now the Union) undertaking has meant up to now. The institutional overhaul to be attempted in the first months of 2012 is to work under triple pressure: time pressure –pressure of the crisis – pressure from the markets; they tend to work combined and to form an unprecedented set-up for constitutional change of occur. Within the same time-frame, Greece will endeavor to stay on board.
The radical change in the very notion of economic/fiscal sovereignty has to enlist not only support from Europe’s political class, but also the acceptance of the legal order of EU countries and – last but by no means least – the adherence of European public opinion at large. For this to occur, not only the historic stake of this attempt to “integrate under pressure” has to be fully realised, but also the content of the changes to be introduced has to sink in (along with existing alternatives, or “non-alternatives”). The fact that constitutional change in Member States is supposed to be
part and parcel of the economic governance proposed (“Balanced Budget Rule”) will have to be combined with ratification/acceptance/ transposition procedures to Member States’ legal orders; the mayhem that almost occurred when the Greek Government proposed an unsolicited referendum, in autumn 2011, should serve as a warning.

The proposed Conference covered – from a European perspective, but also from a Greek one – the following key issues, structured along four main lines as outlined in the draft program:

Ηοw European solidarity has been constructed by the ECJ jurisprudence over the years – and what now? Vassilios Skouris, President, ECJ; President, CIEEL

Furthering Integration as a means of improving future prospects, Christos Rozakis, President, CPA of the Council of Europe

The notion of “economic governance” before and after the “Balanced Budget Rule”,Yannis Stournaras, Director Gen., IOBE

The European parliamentary process as a mechanism to introduce change: how the E.P. has (not) been associated with the negotiations,Marietta Giannakou, MEP, Head of the Greek EPP Delegation to the EP

C.The future of Greece’s adjustment to the new meaning of “Europe”

What “Europe” means for Greece – and what next? Anastasios Giannitsis, Minister of the Interior

Is there a Greek negotiating platform for the EU institutional reform? Stavros Dimas, Minister of Foreign Affairs

The role of the European Parliament and Greece before and after the changes,Anni Podimata, Vice-President EP, MEP Group of the Progressive Alliance of Socialists and Democrats

Building consensus in Greece over tomorrow’s Europe: the role of the civil society, Theodore Papalexopoulos, President, Citizens’ Movement for an Open Society