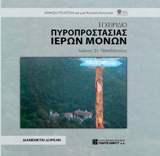 There are over 800 of them throughout the country, most of them are located in, or near, wooded land and far from fire-fighting units, most of them fire-prone, with a lot of wood-work.
We have already reviewed 42 of them in collaboration with the Church of Greece the Fire-fighting Authorities, inspected them and pin-pointed the danger-zones. Above all we have trained the monks for fire-prevention and also for fire-fighting.
We are currently issuing a specialist’s book on these matters, to be distributed to all our monasteries.
We are preparing to start a new such campaign on Mount Athos with its centuries-old monasteries and have just received the Ecumenical Patriarch’s permission to do so.